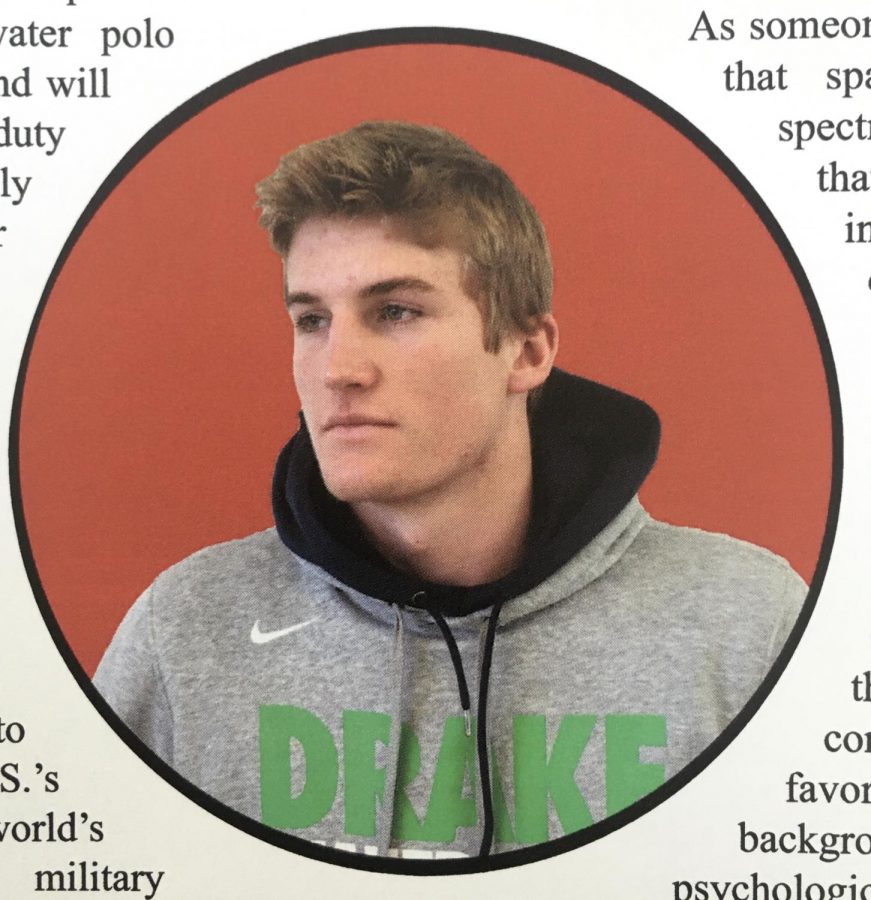 Senior Ian Christie considers himself a moderate conservative, but he believes a label can only go so far to describe one’s political identity. As someone who does not fit the liberal stereotype of the average Drake student, Ian is disappointed by the uniformity of Drake’s political being.

“Drake is dominated by liberal Democrats,” Ian said. “It’s definitely difficult, being someone with more conservative views, to go to school and feel comfortable voicing my beliefs.”

An example of such beliefs is his hardline stance on illegal immigration. Ian generally opposes accepting asylum seekers into the U.S., citing an inability of the U.S. government to be of assistance to said immigrants and the absence of any benefits of allowing them to migrate into the U.S. “I don’t see any advantages for our country allowing asylum seekers to reside in our borders.” Ian said. “Just letting people into our country and expecting them to integrate with society, I just don’t think is beneficial for anyone. I think a lot of people end up homeless.” Additionally, Ian believes all undocumented immigrants who came into the U.S. illegally should be deported, with no exceptions.

However, Ian’s opinion on abortion is the opposite of what would generally be considered “conservative.” About six in ten Republicans or Republican leaners think abortion should be illegal according to Pew Research Center. “I don’t think it’s the government’s right to impose a decision on a woman that has only to do with her and her own body,” Ian said. For Ian, the right to abortion falls under the right to privacy, which is alluded to in the fourth amendment’s prohibition of unreasonable search and seizure.

Ian served as captain of the boys’ varsity water polo team this year and will become active duty military in July at the U.S. Air Force Academy in Colorado Springs. As a future member of the military, Ian believes a strong display of force is necessary to cement the U.S.’s position as the world’s number one military power. “It’s important to show our dominance, especially in countries like Iran,” Ian said. He agrees with the concept of preventative action such as with the assassination of Iranian General Qasem Soleimani, and thinks it would have been a sign of weakness to let Soleimani “do his thing.” Nonetheless, according to Ian, targeting cultural sites, as President Trump threatened on Twitter, would be unacceptable and clearly a war crime.

When it comes to the federal legal status of Marijuana, Ian subscribes to the libertarian perspective. He believes in the rights of individual states to legalize it despite its illegal status federally, and thinks non-violent possession offenders should be released from prison. “America is a country ‘built on freedom,’ and no matter what I don’t think it should be a schedule 1 substance,” Ian said. “If I were in charge, I would decriminalize possession and I would make marijuana federally legal.”

As someone who has views that span the political spectrum, Ian thinks that putting people in categories based on a singular political belief is dangerous and is the source of much of the polarization in the U.S. today.  One example is the issue of gun control. Ian is in favor of “aggressive” background checks and psychological evaluations, but he sympathizes with people who are pro-gun. “I think the gun dispute in this country is aggressive and can get really hostile. The way that you’re perceived if you’re pro-gun creates a lot of other assumptions regarding your beliefs, and it’s also the same thing with abortion,” Ian said. “Finding middle ground on just one issue is a huge step.”