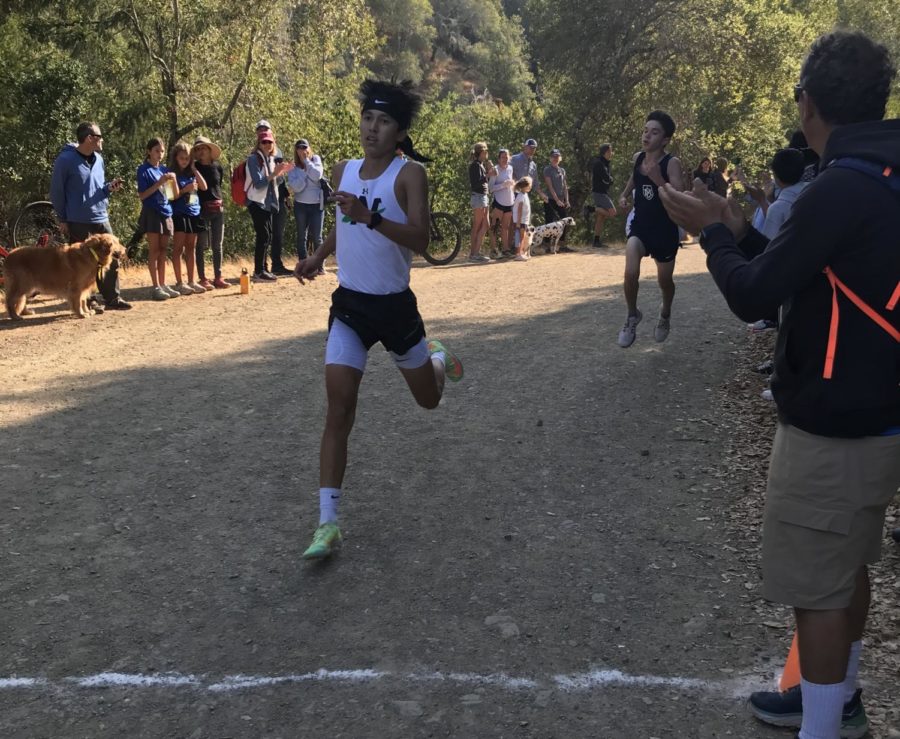 Junior Barret Acker lunging towards the finish line, with fans cheering him on.

The boys tasted defeat for the first time in four years in a tight finish with Marin Catholic. They were missing their top seven runners, who didn’t run because they were resting up for the De La Salle Nike Invitational this Saturday. Without the top seven runners, senior Rowan Campbell was the top runner for the Falcons and got fourth place overall with a time of 17 minutes and 17 seconds. Sophomore Jackson McFerron finished in fifth place right behind Rowan with a time of 17 minutes and 20 seconds.

“I had an interesting start, I kind of tripped a little bit then made it back up to the front… This race for me was one of my top races. Coming in first for t

he team is definitely a very good feeling,” Rowan said. .

“I liked my pace, and how I kept up with the other competitors,” Ally said..

The Falcons’ next cross country race is the De La Salle Nike Invitational on Saturday, Sept. 18 at De La Salle High School in Concord, California. The De La Salle Nike Invitational is the only race that AWHS will participate in that will have Division 1 schools (AWHS is a Division 4 school). They will compete against some of the top schools in the country, such as Arcadia High School who are ranked fifth in the country by Runners World.

“We are not going into this race expecting to win, but I want these guys to compete against some of the top competition in the country.” said AWHS head coach Robyn Berry. “It should be a great experience for our runners and I hope they run well and have fun.”