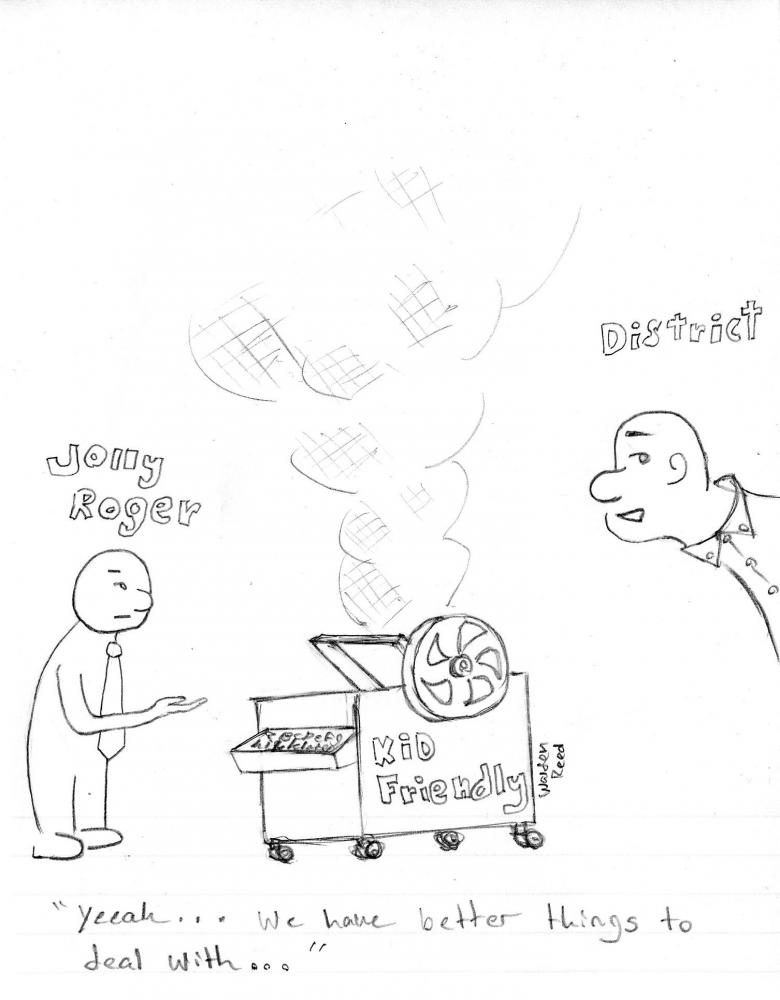 We all stood blank faced as our journalism advisor, Mary Jane Jones, told us that we will not be able to print for 39 months. We sat idly by our computers with brainstorm sheets in hand waiting for someone to say something. The anxiety and worry from our editors-in-chief shown in beads of sweat on their brows.

Three and a half months removed from the closing of the district printer and lay off Gholamali Hekmat.  and the Jolly Roger has not been able to print a single issue.

The district knew of this clause in their contract before the termination of Ali’s job yet neglected to mention it to us. This oversight is inexplicable.

It’s demoralizing for us as senior’s that the district feels that they can play let’s make a deal with our hard work. They would have resolved this issue before it blew up into a big deal.

The job of the people with the big titles is to make public education better for their students, their constituents. Because of the way they handled this it makes us feel like they don’t see their job that way.

We are being used as a bargaining chip in the contract negotiations between the CSEA and the district. That doesn’t feel right. It seems our First Amendments rights are being a tool they can manipulate.

For our staff the Advanced Journalism class that produces the Jolly Roger is more than a class, it’s a business. It teaches our staffers more than just how to listen to a lecture or how to solve a math problem.

“The JR gave me responsibility, ownership and pride at a time when I needed the experience of all of them” said Jolly Roger alumni Josh Gosliner (men of sports, class of 2003) in response to seeing the Marin IJ article about us.

Jones always tells us that she teaches the class year after year because it’s the most real world experience her students get.

We gave the district and the CSEA their time to resolve this. Now it’s time to push back.

As a staff we would like to personally thank The Redwood Bark, Tam News, and Marin IJ for bringing our First Amendment rights issue into the light of the greater public.

But with that said just know that we are disheartened that district administrators who are supposed to work in the best interests of the students would act so foolishly.

“The thing is the penalty — hitting students who did nothing wrong by taking away their newspaper for 3 years — is outrageous. The grownups here need to fix things.” said Mike Hiestand, who we contacted at the Student Press Law Center, a nonprofit organization that aims to protect the freedom of the press for student journalists.

Well now it’s time for the kids to start acting like grown ups.