Community members got out of the pool, turned off the treadmill, left the synagogue, and walked across the street waiting for an all-clear to go back inside. Behind, an adult escorts dozens of children who walked down the street to safety. One phone call compromised safety in a place hundreds gather for love, prayer, laughter, and community.

The Osher Marin Jewish Community Center (JCC) is one local organization that received two bomb threats out of the approximately 166 reported across the United States and Canada since January.

The JCC received it’s first call on Jan. 18 and it’s most recent call on Feb. 27. The members and employees evacuated to Venetia Valley School across the street or to the Mormon Church parking lot down the street.

“I was out on [the field] when the call was made. Then we heard through our walkies a code so we quickly rounded up the kids, grabbing binders and an emergency backpack. People were evacuated completely to the Mormon Church parking lot or to the safest space close to them. Eventually, we got an all clear and went back in,” child care employee Kassandra Parada said.

Hundreds of community members attend the JCC every day for an extensive variety of activities and have had to evacuate two separate times this year.

“Given that I have been a part of our emergency response committee and have attended our safety and security trainings, I am confident that our staff is well equipped to handle any situation. I could not be more proud of the professionalism and commitment my team and the whole JCC staff has shown throughout these past months,” employee Lauren Bohne said.

Thankfully, all the calls made were deemed hoaxes.

“The threats thus far have just been threats, there hasn’t been any action, and I don’t have reason to believe that there is real danger out there. Is this a large scale mass movement or just a few people? If it’s just a handful of people, well there’s a handful of people that do terrible things. I look at the systemic issues and the groups that are really bearing the brunt of historical racism, and I just don’t think Jewish Americans are facing that today,” Social Issues teacher Francie Salle said.

After the election of President Trump, some believe his lack of speaking out about these hate crimes has created national permission for racism and hate crime. An unprecedented election has turned into a frenzy of different reactions.

“I think Trump’s election gave people a license to more openly express their feelings whether it’s anti-Semitism or bigotry in general; it made people feel empowered. I still think the number of people in this country who are racist and anti-Semitic is fairly small, but people who are at the extreme feel more open to talk about it,” Salle said.

Teachers aren’t alone in their concern about a resurgence in bigotry.

Senior Tai Soladay added, “I believe Donald Trump’s behavior has made people believe that hate is okay. Hiring an anti-Semitic chief strategist is just one example. Trump’s election into office has allowed for racist and sexist individuals to believe that their actions are okay because their president engages in the same kind of behavior that they do.”

Trump’s election into office has allowed for racist and sexist individuals to believe that their actions are okay because their president engages in the same kind of behavior that they do.”

Reported by the Seattle Times, on Friday, March 31, federal judge David J. Hale in Louisville rejected Trump’s free speech defense and ruled that there were facts supporting allegations that the injuries  incurred by protestors at one of his campaign rallies were a “direct and proximate result” of Trump’s actions encouraging his supporters to get them ‘out of here’.

According to the Los Angeles Times, Trump and American Jews’ relationship has been off balance since his campaign, when he re-tweeted white nationalists’ posts and was accused of using anti-Semitic imagery. Furthermore, the relationship was hit harder when Trump let weeks pass without addressing the bomb threats.

Following Ivanka Trump’s tweet in response to the threats, CNN reported that Trump said, “The anti-Semitic threats targeting our Jewish community and community centers are horrible and are painful and a very sad reminder of the work that still must be done to root out hate and prejudice and evil.”

Students recognize a long-standing stigma against Judaism. Since the beginning of this year, empty jokes have turned into intimidation at a serious level, evidenced by the destruction of Jewish headstones, and bomb threats.

“For my whole life, I’ve always known there was a stigma against Jewish people, whether it was serious or just in a joking way. I grew up with people, mostly my friends, making jokes about being Jewish. They weren’t a big deal and I always laugh them off, but just the fact that they’ll joke about Judaism as a religion shows that there are common ideals about Jews,” Soladay said.

During this time of division and fear, the administration has done little to assure the Jewish community that they are fighting this together. Pennsylvania’s Attorney General Josh Shapiro exchanged remarks with President Trump about the threats.

Trump said, “You have to be careful, because the reverse can be true,” and suggested this could be done “to make others look bad.”

Reported by CNN, Trump adviser Anthony Scaramucci tweeted that “It’s not yet clear who the #JCC offenders are. Don’t forget @TheDemocrats effort to incite violence at Trump rallies.”

The FBI reported these calls a hate crime and recently the U.S. and Israeli authorities have confirmed the arrest of a 19-year-old Jewish Israeli man responsible for a majority of the calls but not confirmed how many. His lawyer, Galit Besh, said her client had a “very serious medical condition,” preventing him from attending elementary school, high school, and enlisting in the army.

Confusion and tension have risen after a Jewish man was arrested for the bomb threats to Jewish centers. A number of different groups are also being threatened since the election of Donald Trump, as anti-Semitism took shape over these past months,

“I don’t think anti-Semitism in the United States is that big of a problem. My rabbi said that American Jews have a lot of power. It is our responsibility to take care of people that don’t have power; such as members of the LGBTQ+ community, people of color, and people who have historically been disenfranchised. If people have negative feelings in their hearts, that’s unfortunate but the threats to other groups are far more than that. If you look at the number of shootings of unarmed African Americans that is not the kind of threat Jewish Americans face. If you look at people being faced with mass deportation, that is not a threat Jewish Americans face,” Salle concluded.

In the liberal Bay Area, people are not often exposed to ideas presented by the Alt-Right. However, that doesn’t mean that these ideals aren’t pre... 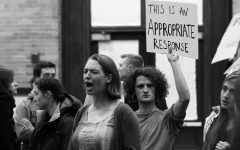 Trend of students refusing to listen to divergent opinions continues