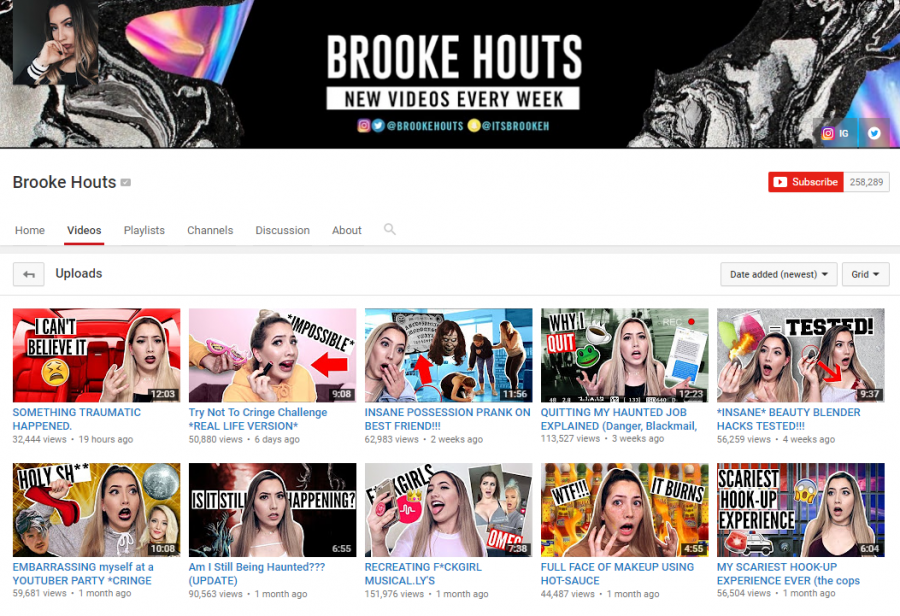 A family sits at a restaurant and their child begins to wail. Instinctively, the parents cope with the beginning of this disaster by shoving a digital device into their child’s hands.

In this day and age, millennials, learn to use social media as casually as learning to say please and thank you. Social media has integrated itself into nearly every aspect of life.

People take hundreds of mindless selfies every day, post on Instagram, snapchat, and Facebook for all their “friends” to see. The majority post without thinking of compensation, but since social media has become such a common platform/part of people’s lives, the opportunity to make money off this has risen.

Advertisers have scrambled onto the social media bandwagon and use popular social media figures to represent their products.

The rapid blossoming of social media has created an entire job market. According to NBC News, popular social media jobs include social media manager whose job is to curate, manage, and grow a brand’s social presence; content marketer who writes and promotes a company’s digital content including blog posts and videos, and last but certainly not least: digital influencer/social media influencers.

Social media influencers team up with businesses to promote products or brand campaigns. They create photo and video content for their own social media platforms, as well as for those run by brands.

According to the December Huffington Post. “Influencers” will promote businesses and various products by posting photos involving the product, using hashtags, and captions.

The Huffington Post also reports that, “Compensation depends on the brand, scope of the project and influencer’s bargaining power.”

Some brands pay between $5 to $10 per thousand followers, others offer $100 per 100 followers and still others pay only in free swag.

Business.com also states that the reason why brands are so interested in working with social media stars is because through “average people’s” social media accounts, “Brands can reach engaged audiences that align with interest groups by entering into partnerships with trusted subject matter experts.”

This new strategy of advertising is both clever and sneaky. It is less obvious than a television commercial, or an ad that pops up on the side of your computer screen, but much more focused in a personal way.

In terms of how much social media stars earn, a Talent Booker at International Talent Agency, Benjamin Oduro states that it varies by who they are, the demographic, and how many followers they have.

Snapchat, Instagram, and Facebook aren’t the only apps that have created careers. Youtube is now a huge money pot and the term “Youtuber” is a surprisingly popular job title.

Brooke Houts is a student here by day, celebrity Youtuber by night. She started uploading Youtube videos in January 2016 twice a week.

Houts’ Youtube channel has skyrocketed within the past year. Around a year ago she had 1,000 subscribers and now she has around 240,000 which multiply every day.

Houts began to play with the idea of starting a Youtube channel in 2014, but she didn’t start posting videos until later.

“I was going through some intense personal issues in my life when I began to think about creating a Youtube channel. At that point, YouTube was one of the resources I used to make me laugh or feel better when I was down. I decided I wanted to be that source of happiness for others as well.”

When Houts first created her channel, the network she is currently signed with asked her to sign with them. In the beginning of her Youtube career, she wasn’t making much. Her videos then brought in about 50 cents per month.

Now, Houts declined to state her specific income due to her contract with her network.

“Now I make a sustainable and steady income over the average middle-class bracket. I’m so grateful I’m able to have my work also be my passion. I never forget how thankful I am to have a job that I absolutely love,” Houts said.

She gets brand offers and partnership inquiries through her business email almost every day.

The massive influence social media stars have and all the potential businesses see in advertising on these more personal platforms with fan bases has grown.

“There are always brands looking for people to represent them, but I only choose the ones I truly like and stand behind,” Houts said.

According to Houts, YouTube revenue is based on AdSense and views, so there is really not one standard rate that can be derived from making one video alone, because it’s always different.

Income from Youtube is dependent on views, although likes and comments help to draw more attention to the video. Houts explained that most YouTubers are paid through their network at the end of each current month from the past month’s accumulation of views.

In the world of social media, becoming a “star” is difficult, but being personable and passionate about chosen subject matter goes a long way.

Houts is extremely thankful for her growing success on Youtube.

“I have met so many new people and made amazing friendships through YouTube. I’ve also gained an incredible amount of opportunities with the help of my manager, and those will hopefully only continue to come as I move forward in my career each day. I believe the one thing I’m most proud of in my entire life is my YouTube channel. It has since turned into so much more than that and means more than words could describe to me,” Houts said.