Students huddle around pizza table during a Consent Week lunch time activity in the Student Center. The activity focused on agreement with your partner about what you wanted to order as toppings for a pizza as a metaphor for agreeing about sex.

In early October 2015, California became the first state to make it mandatory to teach consent in public high schools under the SB 695 law. The new law set took effect on Jan.1, 2016 and requires all California districts that have a health requirement for graduation, include lessons on affirmative consent.

According to the Assistant Superintendent of Educational Services Tara Taupier, Social Issues is the class in which the school teaches consent during freshman or sophomore year, and it is required for graduation.

Memory may fade from 9th to 12th grade and some students want it reviewed during their junior and senior years. Students rarely remember what homework they did last week. There is a slim chance upperclassmen remember the lesson taught regarding consent during freshman year.

“I think teaching about sexual consent in school is a no brainer. If students are learning about safe sex, then also teaching kids about affirmative consent is vital to their relationships with others in the future.

“It shouldn’t just be taught in Social Issues, but touched on in every grade: as we get older, the lessons around sexual consent become more important and prominent,” senior Tai Soladay said.

Social Issues teacher Dan Freeman has taught the consent lesson in his class and emphasizes the importance of it continuing throughout your high school career as well as early adult life.

“Having lived as a high school and as a college student, it is really important to know where the boundaries are. I don’t think I necessarily knew that as well as a younger person. People’s safety and security has always been important, but from a legal standpoint they are considerably more consequential.

“In the lives of young people drugs and alcohol are a part of that culture and so that leads to all kinds of really bad situations. Putting that topic on the table allows students to hear about it, talk about it, question it, and ask questions about it, from people who are professionals and that’s going to be useful,” Freeman said.

As winter comes to a close with Winter Formal and spring approaches with Prom on the horizon, dancing occurs that involve student’s consent and ability to know when their comfort zone is being pushed. Peer Resource teamed up with the Wellness Center to organize a Consent Week aimed at bringing awareness to the issue to all grades. This week allowed students an opportunity to better understand and be more aware of affirmative consent.

Peer Resource student Reece Olrich said, “Consent week aims to bring more awareness to a problem that nobody likes to talk about. I think this issue is one of the most important because people who don’t know enough about it don’t even realize they are at fault. I think at Drake we do need to think more about consent especially at dances, where I have seen people visibly uncomfortable with the physical actions of others.”

Especially as students start moving closer to college, where one in four college women have survived rape or attempted rape, a statistic stated by former Vice President Joe Biden whose source is the Campus Sexual Assault Study conducted for the Justice Department’s National Institute of Justice. There is a need for upperclassmen to hear this message again.

“Under the Wellness Centers in the Tamalpais District, we created an affirmative consent workshop in which we educated all the Social Issues teachers last spring. It is very important to get in ninth grade, but the issue is that it’s also most important to get as a senior because you’re about to graduate and go to college. In California, there is a law in place about consent. I think it is really important to figure out a way to get this information to seniors,” said Jessica Colvin, director of the Wellness Center in the district.

Affirmative consent week brought needed awareness to this issue. Students deem it necessary to have this conversation be open and continuous until their senior year.

“Having done an internship over the summer around sexual assault on college campuses, I feel like it’s very necessary for all students to learn about affirmative consent before they graduate. Women are at an extremely high risk of being sexually assaulted in college, and their knowledge of the situation can be really helpful. For boys, too, if they can learn about affirmative consent then that’s really the first step to preventing sexual assault and promote healthy sexual relationships,” Soladay said.

The law now states that there is a “yes means yes” policy which has replaced “no means no.” It introduces a way for both parties to feel comfortable throughout the sexual interaction and continue to make sure both feel safe at every step. As the law changes and as sexual interactions are heightened during high school.

“Consent is voluntary. You have to be conscious. It it has to be a yes, it can’t just be a no. There are all these new requirements and people need to be educated about it,” Colvin said. 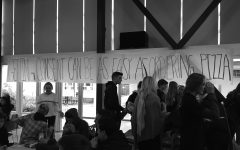 Public concerns result in changes to state legislation regarding consent