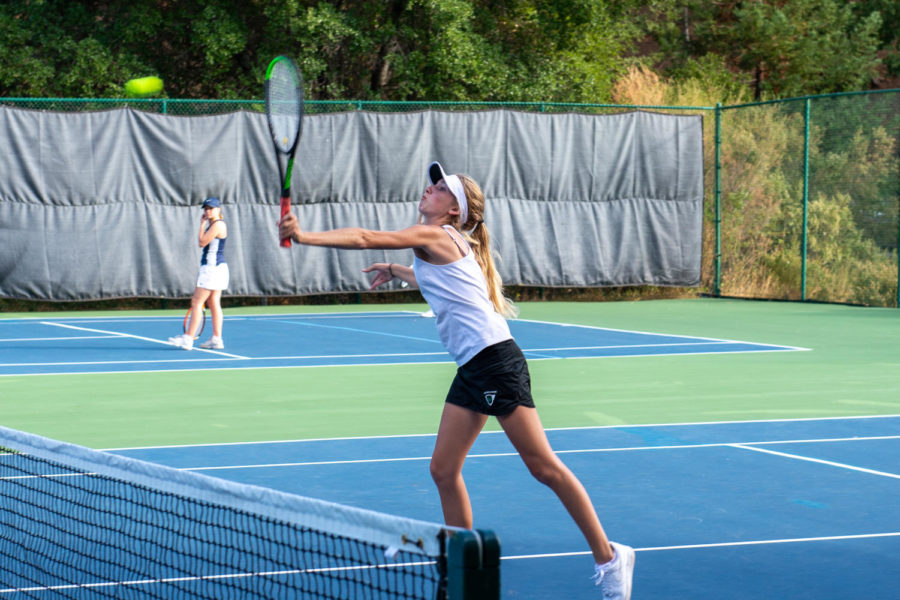 “I think the team did very well, staying focused on being consistent, although I didn’t feel too much pressure because I knew we could beat them,” said varsity sophomore player Allegra Di Carpegna. “The tennis team hasn’t made it into MCALs in a long time.”

Marin Catholic put up a difficult fight by winning all the doubles matches. The AWHS girls shared a similar experience when they last played Marin Catholic.

“I was excited to play Marin Catholic because last time we played, we didn’t win by much. We didn’t want to lose because I know it will be a close match,” Allegra said.

One of the AWHS girls’ main strengths was earning points when up at the net, allowing them to have more control over where to hit the ball. Focusing on the girls’ strengths and weaknesses is important to AWHS Coach Jeff Palladini.

¨I think the primary thing we still need to work on is the thing that plagues high school players everywhere, movement and footwork. Those are critical fundamentals to continued improvement, and will help us move towards even better outcomes than were already seeing this season,” Palladini said.

While many aspects of the game contributed to the win, the team worked notably well on perseverance. Palladini encourages players to keep a “fight” mentality during games, meaning to stay strong continuously throughout a match.

¨We’ve been able to battle through setbacks like being behind early and fighting back, or getting thrown by a bad call or unforced error,¨ Palladini said.

The varsity girls tennis team hopes to keep adding more wins to their season record of 6-3. While Marin Catholic was an even matchup, the AWHS girls expect a greater challenge during their next match against Branson on Oct. 8.