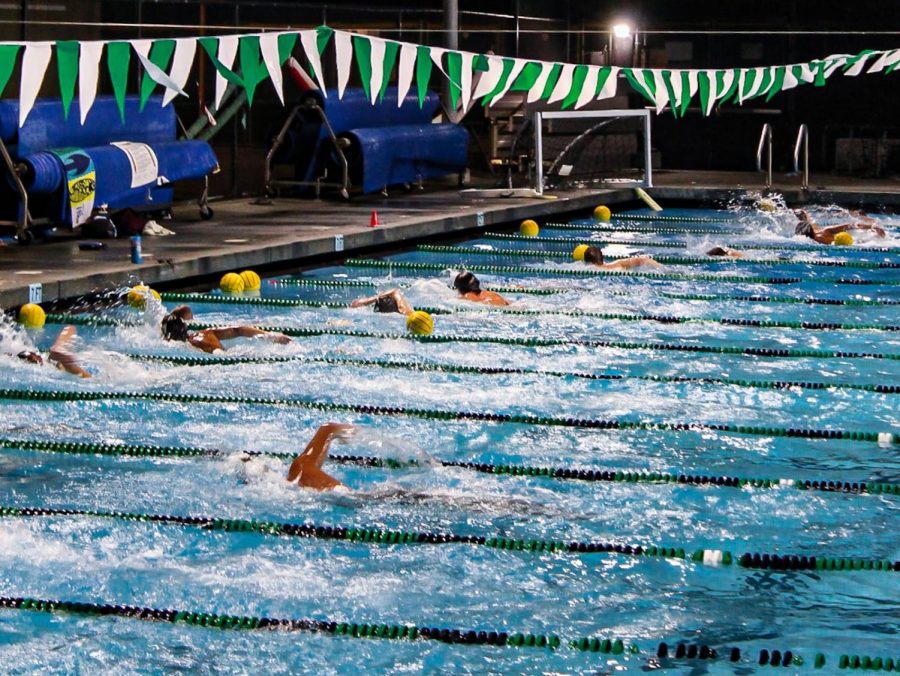 Boys’ varsity water polo team members swim across the pool as fast as they can when Coach Swanson says “go.”

According to Coach Matt Swanson, the boys on the HS 1327 team are also on the Sleepy Hollow Aquatics club team in order to stay in shape and sharpen skills before the official start of the season.

The boys practice at 7:00 p.m. on Tuesdays and Thursdays at the HS 1327 pool like previous years, but this is where the normalcy ends. Several COVID-19 safety precautions are strictly enforced, limiting close contact and mandating temperature checks, two players per lane and entering and exiting from three separate gates in groups of twelve.

“[We have] all of the social distancing protocols,” HS 1327 senior Isaiah Williams said. “Everyone’s taking their temperatures when they come in. There are three separate gates with pods of twelve (…) and we have to stay in our assigned lanes pretty much and there is one person on either wall to make sure everyone is as safe as possible,” Williams said.

Twelve of the boys on the water polo team began practice in the Bel Marin Keys located in Novato, where one teammate has a house on the lagoon. These twelve make up most of HS 1327’s varsity team.

“As a pod of twelve we have been able to do more water polo type stuff, all committing to staying in our pod in order to protect [eachother] against COVID-19,” Williams said.

The team’s top priority this season is winning Marin County Athletic League (MCAL) first. Making it to the North Coast Section (NCS) is the ultimate goal of the team, who lost in the first round of the open division last year.

COVID-19 protocols have made practices difficult logistically, severing a large aspect of the team dynamic. “It’s made it pretty hard (…) water polo is a team sport so we all rely on each other,” Lacy said. Despite the logistical struggles, the team works hard to stay mentally strong and united as one team.

With plans of coming back to school, Coach Swanson and the team remain hopeful that they will get their season back. “We’re hoping to start high school practices right after Thanksgiving,” Swanson said.

Although the COVID-19 pandemic is still a threat to members of our community, the Boys’ Water Polo team has found a way to safely practice within their pod. They remain a strong, united team and hope to continue to grow this season.