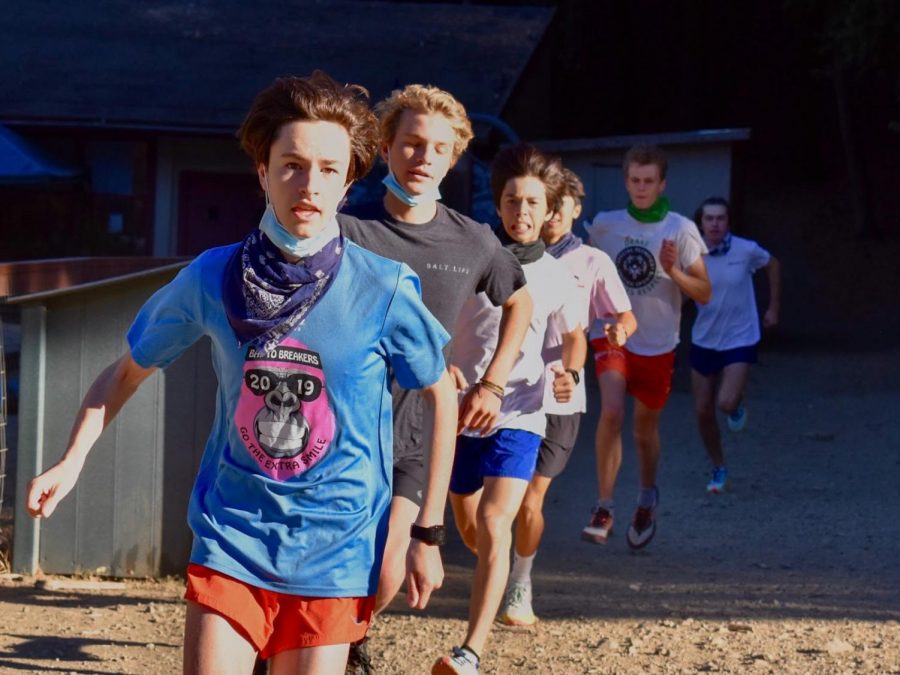 Due to COVID-19 safety precautions, the Marin County Cross Country season was pushed from fall to winter. This delayed season would discourage many teams from conditioning this fall, but the boys High School 1327 (HS 1327) team is hungry to run and is shooting for another Marin County Athletic League (MCAL) title and a place at the state podium this year.

The HS 1327 team moved up to Division III (DIII) this year due to placing in the top three in North Coast Sectional (NCS) and the State Championship in the Division IV last year. DIII schools and sports teams are usually larger in size, which means a more competitive season. “The competition is stepping up, so we are gonna have to step up with it,” said senior Nick Parr.

The team has been conditioning all summer, either by running individually or in small groups. It’s been hard to keep motivated due to the sluggishness of the current statewide quarantine, but luckily for the team, cross country is impacted by the pandemic far less than other sports. “Cross country is a sport where you don’t need a baseball field, you don’t need a basketball court, all you need to do is pick up your shoes and start running,” senior Calvin McCarthy said.

Coach Robyn Berry knows that training without any races on the schedule is challenging, and it’s especially hard to know how often and when to train. However, she remains optimistic for this year. For the past nine years, she has been building HS 1327’s cross country team and knows her team is not afraid of hard work.

“Over the course of four and a half months, this team ran a total of 6,052 miles,”  Berry said. At the time they ran this distance, the team had a total of 12 members.

Berry feels what makes the team special is that everyone plays a significant role. Even on the hardest training days, the HS 1327 Boys’ Cross Country team is still a positive and welcoming environment.

Given the unique circumstances of the upcoming season, training to earn another NCS and state title is an ambitious goal, but the team is nothing if not resilient. “When I told the team that this year would be tough, they said bring it on. Let’s see who can handle not racing for 6 months and can get back together as a team. I think we’re the type of team that can do that,” Berry said.