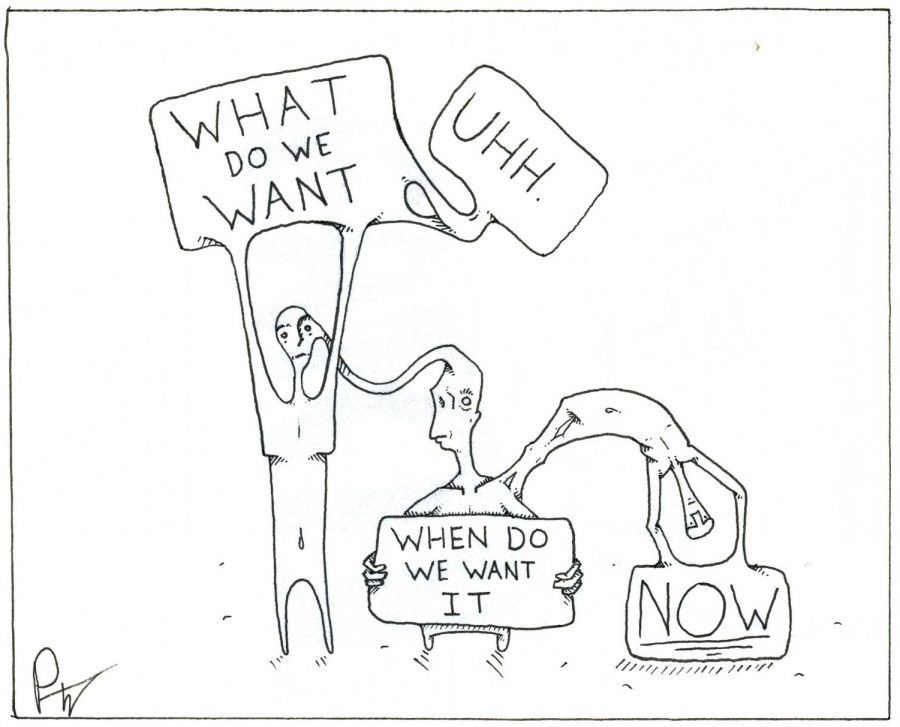 September 20th, 2019. Berlin, London, New York, San Francisco, and hundreds of other cities around the globe. Thousands of school children and adults played hooky from school or work and marched in their city streets. They marched for their future, to defy the corporate status quo, and to support those who have been or will be affected by climate change.

Well, some would disagree with that characterization. For a dilemma as broad and important as climate change, different individuals and organizations are free to connect this issue to their own platforms or philosophies. As a result, the intentions of the climate strike movement can fall in and out of coherence.

In an attempt to find what might be considered the most widely accepted social platforms and policy suggestions, I scrolled through websites of organizations like Extinction Rebellion, Greta Thunberg’s Youth for Climate Strike, Global Climate Strike, and Climate Justice Alliance. I noticed that although their plans and message vary in radicalism, a few key ideas are the same.

The solutions they propose seem to vary, so it’s not easy to pin down what exactly these activists are fighting for. Notice how convoluted it has gotten from just “Act Now: Save the Climate?” Now that we’re getting down to the meat of the issue, things become more complicated.

Let’s start with point one: climate justice. What does it mean? According to Wikipedia, it’s a term used to frame global warming more broadly as a failure of morality and recognition that some people, mainly poor minorities, are disproportionately affected by climate change (rather than one based entirely on environmentalism.)

The Global Justice Ecology Project website proclaims that “[t]he heart of climate justice is the understanding that the urgent action needed to prevent climate change must be based on community-led solutions and the well-being of local communities, Indigenous Peoples and the global poor, as well as biodiversity and intact ecosystems.” One thing that stands out here is the focus on the indigenous and “global poor.”

The reason for this fixation lies in that tenet of climate justice, that they are “disproportionately affected” by climate change. However, there are many demographics that are or will be affected disproportionately by climate change: people who live on coasts, farmers that grow temperature-dependent crops, and people with lung problems like asthma, to name just a few. Why focus on only two communities when talking about climate change? Almost everyone, everywhere, either experiences or will experience the damage caused by climate change in a distinctive way. A platform such as this must appeal to common humanity, not specific humanity.

“Rejecting false solutions” is the most egregious idea out of the three points mentioned previously. Multiple organizations claim that “market-based solutions are mitigation mechanisms” and that “climate change will never be stopped by market schemes.”

These activists reject “offsets” such as Article 6 in the Paris Agreement (Sustainable Development Mechanism), which aims to deliver an overall reduction in greenhouse gas emissions. They reject research into geoengineering Earth’s climate, “technofixes” such as carbon capture and storage, carbon trading (they claim carbon trading “infringes Indigenous rights,” this is not cited with sources), “corporate-funded smart agriculture,” bioenergy, etc.

The organizations’ proposed solutions include taking energy sources away from corporations and moving away from nuclear, bioenergy, and mega-hydro energy, as well as supporting “gender-responsive” climate technologies and “community-led” solutions that “recognize the traditional knowledge, resilience, and wisdom of indigenous people.”

These activists describe their solutions as “community-based,” but that concept coupled with a stubborn refusal of the usage of modern technology, a focus on indigenous “traditional knowledge,” and rejection of “market schemes” points to a desire by these organizations to fight climate change  not only by regressing technologically but also by rejecting our current system, both social and governmental, under the guise of doing indigenous people some kind of justice. The loudest and most prominent climate change activists reject proposed solutions because the solutions operate under a system they deem unjust. This is not only an error in judgment but a death sentence for their platform.

Finally, point three. “Just transition” appears to be a key component of their platform.  It is defined on the Climate Justice Alliance website as “a framework designed to transition an extractive economy to a regenerative economy.” It is also expanded upon as “a way of redressing past harms and creating new relationships of power for the future through reparations.”

Climate Justice Alliance also has a framework design on their website that depicts our current economy and governmental system (“militaristic, exploitative, with a colonialist mindset”) transitioning to a new, more socially mindful system (“deep democracy, regenerative, with a caring and sacredness mindset.”) In order to achieve these aims, they propose transferring economic control to hyperlocal communities and democratizing wealth and the workplace, among other things. Summarized, proponents of this “just transition” want to shift our current social and governmental system to a socialist and anti-federalist democracy.

Our discourse is currently fixated upon whether or not climate change exists, and not specifically what we’re going to do about it. The moment it became a partisan issue, the debate regressed significantly. Now, the groups getting into the nuts and bolts of a practical solution aren’t conservatives or moderates, they’re left-wing extremists. What have they created? A group of solutions that reject technology, hyperfocus on identity politics, and attempt to transition to a radically socialist, decentralized government.

Greg Lukianoff and Jonathan Haidt’s The Coddling of the American Mind discusses how the American public is becoming more extreme due to the dumbing down of landmark political issues. Their book makes this statement, which wraps up the key problem to these extreme positions: “For activists seeking reform, the lesson is to find common ground. Marches and rallies are good for energizing your ‘team’, but… they are not enough to bring about lasting change. You have to win elections to do that, and to win elections, you have to draw in very large numbers of people from diverse groups.”