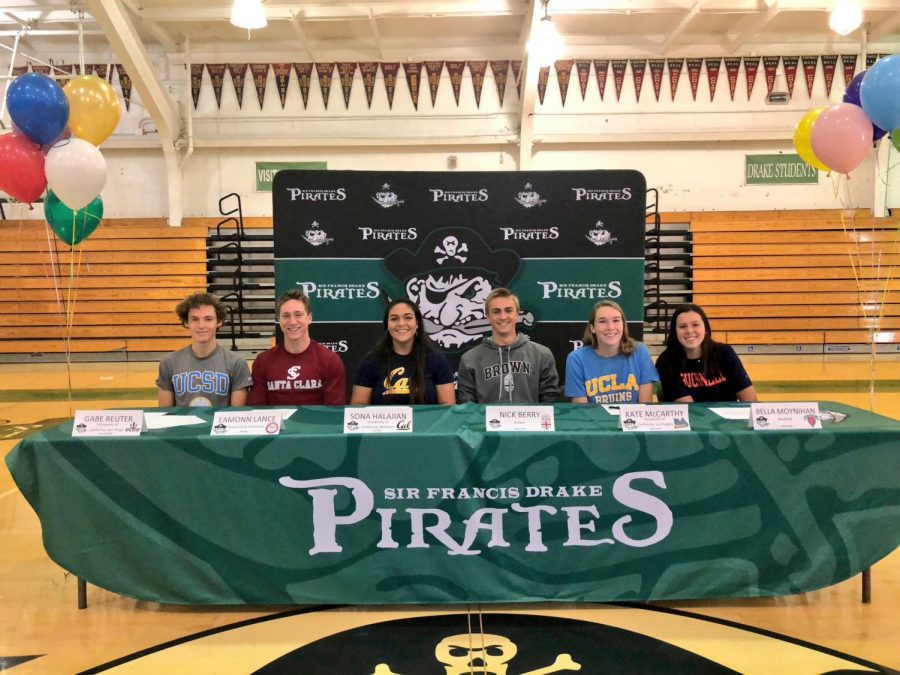 Throughout the year, there have been many athletic accomplishments from students. 13 students will take their talents to the collegiate level next fall.

Eamonn Lance has had an impressive four years on the baseball field as a three-year varsity starter. Lance has set the record for most home runs in a single season, and the record for most career home runs with 23, while being named MCAL Player of the Year in 2018. “I have put in a ton of work throughout my years at Drake, and I am just proud that it all paid off. I am excited to play at the next level and continue to grow as a player,” Lance said. Lance will become a Bronco at Santa Clara University.

Pole vaulter Simon will continue her track and field career at Pirates anticipate collegiate play next fall  Simon won 2019 MCAL Player of the Year for her pole vaulting success.

Reuter and Pompili will be running both cross country and track at the University of California, San Diego. McCarthy will continue to run at Loyola Marymount University. “I have been running with these boys all four years, and I have had so much fun training with them and running alongside them. It will be very sad not being able to run with them, but I am very excited to see how successful they will be in the future,” McCarthy said

In the past both boys and girls water polo teams have produced multiple Division 1 athletes. This year, the list continues with four hardworking players: Kate McCarthy, Logan Anderson, Nick Berry, and Bella Moynihan. Both Anderson and Moynihan won 2018 MCAL Player of the Year, and McCarthy and Berry received 2018 MCAL First Team All-League.

On the volleyball court, Malia Coyle and Remy Pelzman have decided play at the collegiate level. Coyle and Pelzman are two of the many superstars on the girls volleyball team this year. Coyle was recognized for her success by winning 2018 MCAL First Team All-League. They will both play next year, Pelzman at the College of Marin and Coyle at Humboldt State University.

Sona Halajian committed to the University of California, Berkeley to play softball her freshman year. Halajian’s accomplishments on her competitive California Nuggets team, such as being ranked in the top 10 best high school softball players, have demonstrated her pitching talents. “Playing on this travel ball team has allowed me to become a more advanced pitcher and has trained me to be successful at the collegiate level,” Halajian said.

Jackson Mason has been a swimmer to watch throughout his life, starting with the Sleepy Hollow Club Swim Team. Throughout his high school career, he excelled in the pool by being in the top 10 times in the county for the 200 freestyle. He will swim competitively at the University of California, Santa Barbara.