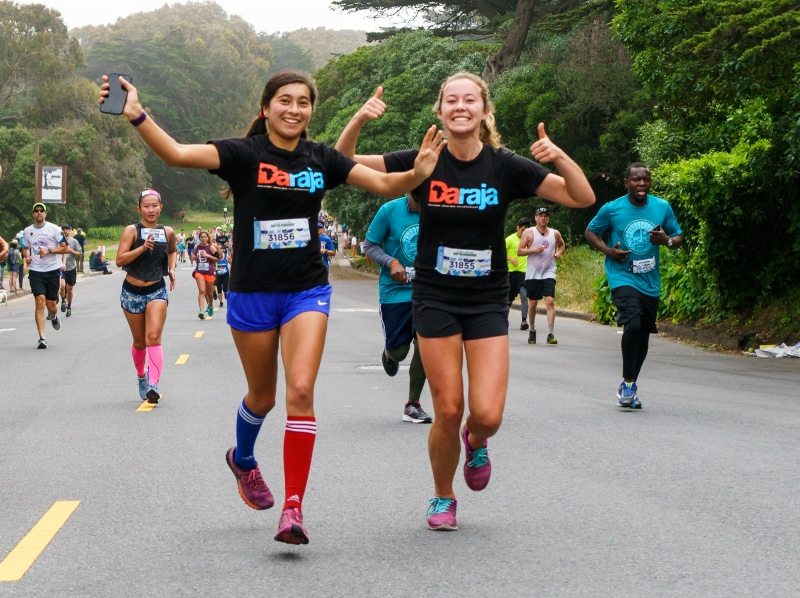 The school’s Daraja Club continues the tradition of running Bay to Breakers. The club has been active at this school for the past eight years and raises money for the Daraja Academy in Kenya.
The club reached their ambitious goal of $10,000 for the 2018-19 year a day before the Bay to Breakers race, a feat they had never before accomplished.

“We have the goal of raising $10,000 because that is the exact amount it costs to pay for one girl’s education at Daraja for four years.” co-leader Lea Baskin Monk said.  The vision for Daraja Academy took place after Bay Area teachers Jason and Jenni Doherty visited Kenya in 2006. They were struck by the degree that gender influenced opportunity.

Many of the young women’s education was cut short due to the expectation of marriage. According to UNICEF, 28 percent of women are mothers by 18.  Jason and Jennifer Doherty envisioned a school in Kenya that would encourage young women to break the cycle of child marriage and continue to higher education. In 2009 their hopes were realized with the creation of Daraja Academy. The Doherty’s partnered with local Kenyan educators Victoria Gichuhi and Charles Mbuto.

A student in 2011 founded the Daraja Club.

“Drake’s Daraja Club has been the longest lasting.” club co-leader Téa Kaiser said.
The school currently houses 118 students. The Academy relies on financial support from clubs and organizations such as the one here.

The club leaders have used their hard work and leadership skills to raise awareness and funds but also had a little “luck of the Irish.” While packing up after fundraising on St. Patrick’s Day the co-leaders were approached by a person who inquired what the fundraiser supported.

An anonymous organization offered to pay for 12 students, eight from here and four from Redwood to visit the Daraja campus in Kenya. “We are so incredibly grateful to be offered this amazing opportunity, and we can’t wait for the June trip.” Baskin Monk said. Kaiser agreed.

The club will finish off the year with a trip to Nanyuki, Kenya, the Daraja Academy’s campus.

“We are so incredibly grateful to be offered this amazing opportunity, and we can’t wait for the June trip. It will be awesome to talk with the girls,” Kaiser said