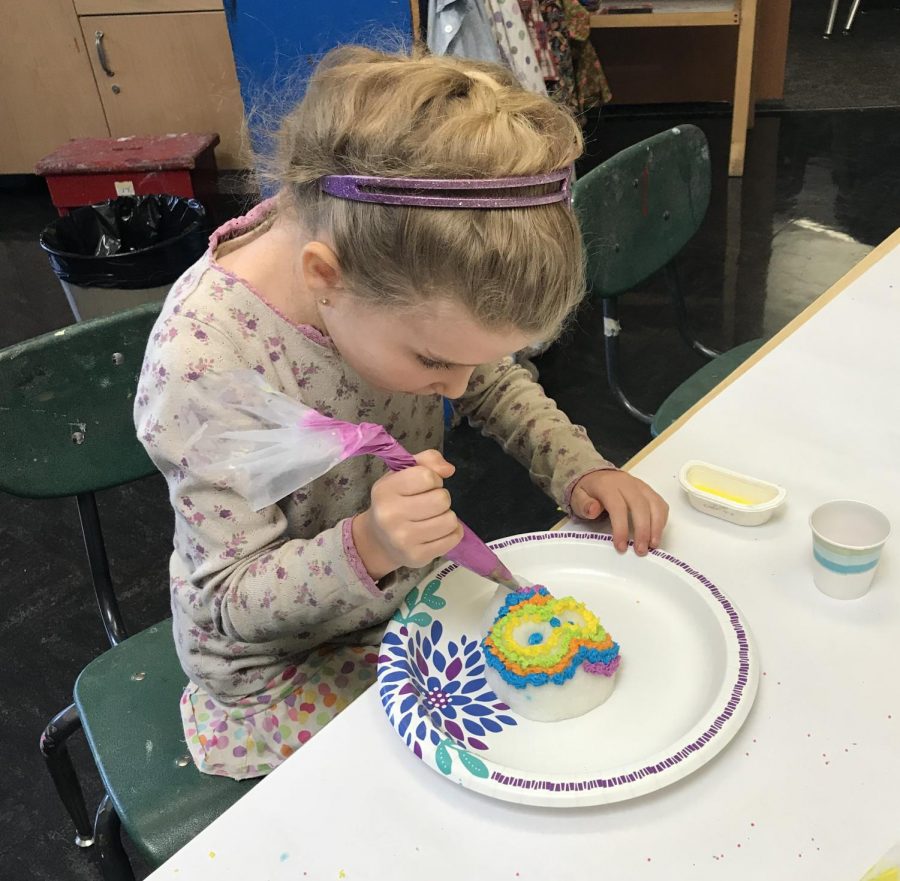 An evacuated girl makes a sugar skull for Dia de los Muertos at Open Classroom in San Geronimo on Oct. 17, 2017

Fire threatened homes and changed the lives of many Sonoma and Napa county residents including several staff here.

At around 12:30 a.m. science teacher Alan Neally started to receive texts from friends about the fires. It wasn’t until 2:30 a.m. that he and his wife evacuated from their Glen Ellen home.

“We could feel the hot wind, we could see the light, and we could hear the fire coming towards us. I had two to three minutes to try and get our pets and a couple of things together,” Neally said.

Luckily, Neally’s home is still standing. However, the damage is evident in his neighborhood.

“The fire burned right down to the deck and the flames had been about two feet away. We found out that our neighbor’s grandson had stayed behind that night, and he was running around with a hose, putting out fires in hot spots. He probably saved our house,” Neally said.

Neally and his wife manage several properties in Sonoma County that burnt down. One hotel property has been in his wife’s family for over 30 years.

“Suddenly my hometown has been destroyed and wiped out. It’s going to be a long rebuilding process,” Neally said.

Assistant principal Liz Chacon was on advised evacuation for one week following the start of the fires.

“It was like we were in a ring of fire. It was burning right there and I didn’t feel safe,” Chacon said.

Though the Santa Rosa area has been affected by the fires, Schwedhelm, a member of the Santa Rosa City Council, encourages citizens to continue coming to Santa Rosa and to help support residents and local businesses.

“Santa Rosa is still open for business. Downtown Santa Rosa was not directly affected by the fires, and it’s still a beautiful place. We have a lot of great restaurants. It would help support local residents and businesses, to continue to visit, especially when we’re still battling the fires,” he said.

English teacher Amity Hotchkiss lives in the southwest side of Santa Rosa and saw the flames from her house. She did not evacuate because the Route 12 freeway separated her home from the flames concentrated primarily on the eastside.

“It’s really scary. On Sunday, you could see a full on plume coming up from Annandale, which is where I usually hike,” Hotchkiss said.

Currently, Hotchkiss is housing a mother and her son. She is considering renting to them long term.

“Everybody needs housing. Housing was in such short supply before and now nobody knows where these people are going to live. I feel sorry for the people who were on a shoestring already. For them, it’s going to be very tough to find a new place,” she said.

Susan Rusche, president of the Marin Environmental Forum, sees the positive sides that arise from the natural disaster.

“As people rebuild, we should rebuild in way that helps the environment. We have an opportunity, which nobody wanted, to create new housing. Wouldn’t it be nice if that housing included solar, recycled and green materials?” Rusche said.

Science teacher RaeLynn Kaiser lives in Santa Rosa and was in Healdsburg when the fires started.

“My first thought was to tell my dad about the fires and go wake him up. There wasn’t any service, and we weren’t able to get to him because of traffic. I didn’t know if he was alive or not,” Kaiser said.

In a matter of two hours, seven major fires burned their way through Sonoma and Napa counties. On Sunday Oct. 8, 75 mile-per-hour winds fueled the blaze as it licked its way through neighborhoods destroying homes. The fire moved from open space to an urban area where it rapidly moved from one block to the next.

First responders were on active duty without relief for 96 hours. After the fourth day, the departments switched back to their usual schedule of 48 hours on activity duty and 48 off.

“Despite every available fire fighter working and fighting on the lines, the fires were still beyond our capability,” said Graham Groneman, a battalion chief for the Marin County Fire Department.

The Marin County Fire Department is prepared and fully staffed in the case of a local emergency even when aid is needed elsewhere. This was evident during the Highway 101 fire in Sausalito south of the Rodeo exit in early October.

Lagunitas School District in San Geronimo California was a source of aid for affected families. They took in many families from the neighboring counties and provided them with food, shelter, health care and even simple things such as haircuts.

According to Principal Laura Shain, all of the supported families were able to eventually return to their homes. The last family left the shelter on Oct. 16. The Marin County Health Department, the Nicasio Fire Department and several other organizations helped provide meals and aided these families.

Similar to what Tam District students might encounter, the school’s elementary schools and preschool program welcomed several new students that have enrolled due to the fires.

“They were quickly accepted into the community and seem to be thriving. Of course they are sad and miss their old school. But, it’s been amazing to see these kids’ resilience and excitement about joining the Valley community.” Shain said.

Wilkerson, who lives in Santa Rosa, experienced the aftermath.

“I find that in catastrophes or collective tough times, people come together. On the news, you see the misery, which is true and valid, but there are also situations of people bonding and communities becoming stronger,” he said.